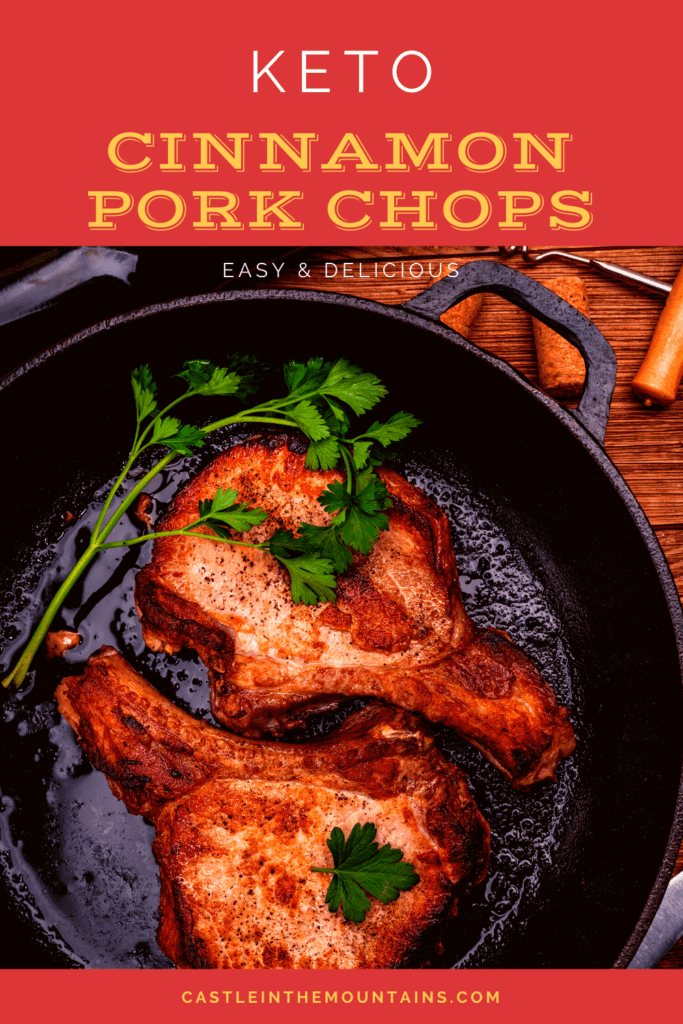 Keto Cinnamon Pork Chops will satisfy your inner caveman and your inner chef at the same time.

They can be fried in a skillet or charred on the grill if you don't want to heat up your kitchen.

If you haven't ever tried cinnamon on pork, you are in for a treat. The flavors meld in the most delectable way.

The ingredients and instructions are geared toward making Keto Cinnamon Pork Chops in a skillet. But it wouldn't take much to convert them to a BBQ feast.

Most people know how much salt and pepper they like. You can always wait until the end and everyone can season their own chops if you prefer.

If you are going to "dry brine" these chops, you might want to check out this post. It explains it well and since this is a recipe post I'll let the meat experts guide you on dry bringing.

I used to do the traditional "wet brining" but dry brining is so much less wasteful and never gives you the "spongy" texture that wet brining sometimes does.

Plus, it makes for a tender and juicy chop that will have every one saying "mmmmm" when they take their first bite.

Does it sound strange to add sweetener to meat? If so, you aren't alone.

But don't worry, your chops wont taste like cinnamon toast. The sweetener is not prominent but it will bring out the cinnamon flavor and tenderize your meat too.

This is not an ingredient that you want to "wing" with extra.

I always add about twice as much garlic, pepper, and whatever spice I am using as any recipe calls for too.

But nutmeg is not one that you want to do that with...at least not in a pork dish.

I'm not the cooking police and I can't tell you what to do, but be careful with this spice...to much will ruin your dinner.

You can use whatever kind of vinegar you like but the slight apple flavoring is divine with pork.

It's not necessary if you are in a rush but makes the chops juicy and tender.

If you want to cook these on the grill, skip this step and toss 'em on the barbie and continue ( you'll need to adjust the times for your own grill of course).....

Yep, it's okay to eat your pork "rare" if you dare. I like them at about 165F but NO HIGHER because they dry out like shoe leather.

Some say char broiling is bad for us and I am not a scientist. If you eat a lot of eat you should probably aviod this if you can but I choose to blacken my chops a bit when I have them.

That's all for the Keto Cinnamon Pork Chops!

I hope you love them as much as we do. And, as always, please leave a comment or question in the section below. 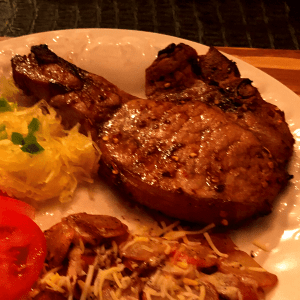 Thom Collins
Hearty, savory and packed with flavor is the best way to descibe this juicy and tender pork chop. See the post for the secret to perfect pork chops everytime...
5 from 2 votes
Print Recipe Pin Recipe

Nutritional info is based on making four pork chops.

The nutritional information is provided as a courtesy. We are pretty careful about our figures but if you ever feel like anything is off please feel free to do your own calculations.

I'm the Queen B here @ Castle in the Mountains. BSN, MBA. I am a keto enthusiast and food blogging coach.