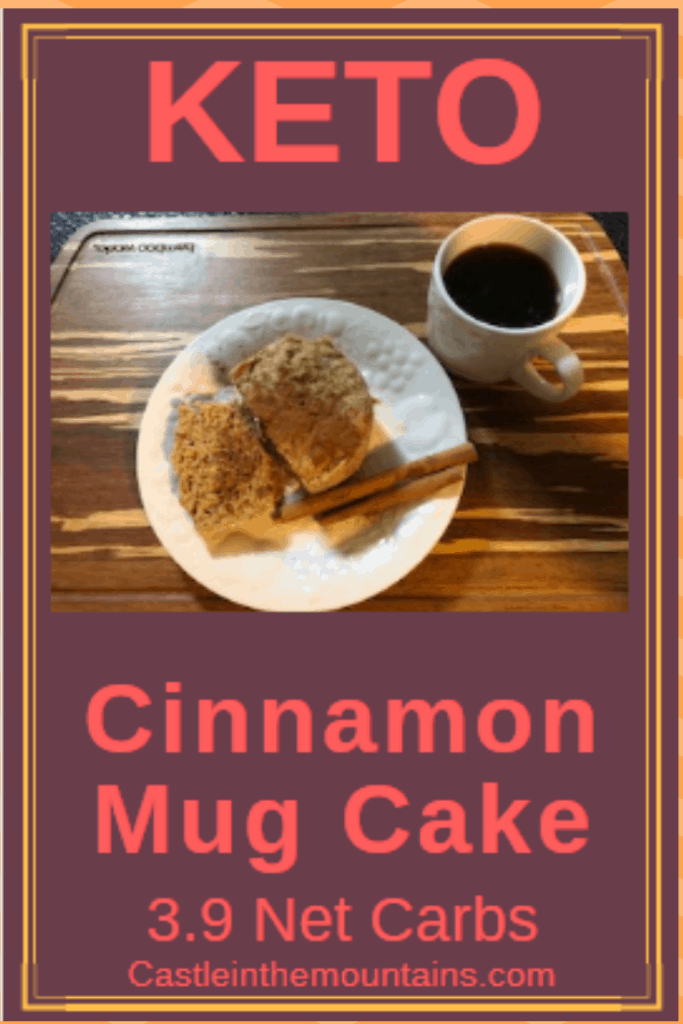 Mug cake recipes are the best Keto Treats. The Keto Cinnamon Mug Cake is great when you are trying to stay on track and keep your carbs low.

You just never know when you are going to want something sweet.

Having a quick and easy recipe on hand, that can be made in under five minutes will keep you from raiding candy when you get in a pinch.

There are lots of Keto Recipes for mug cakes out there because even though sugar cravings are reduced when you are living the Keto Lifestyle. But they don't go away completely...try this Chocolate Coconut Mug Cake if you need some chocolate. It's my favorite.

Humans have evolved to crave sweets...

First of all, I hate the term "sweet tooth". It sounds like a nasty dental condition where your teeth turn black. But the term is used quite often when I tell people I have started down the Keto Path.

I constantly hear..."I couldn't do it, I have a sweet tooth".

But that's the beauty of starting the Keto diet now. There are millions of clever people who have lost weight with this diet because it curbs the appetite for sweets. And, even when the urges do creep up there are substitutes and awesome Keto choices for almost any treat you could think of.

It's easier than ever because chefs from all over the world have developed recipes to combat carbs and make desserts somewhat healthy. Until last year I had never heard of erythritol...

I have been wary of sugar replacements for years because of the nasty chemical laden products like Splenda and Acesulfame K that lurked in the "sugar free" foods at the market.

But tons of INDEPENDENT studies have been done and some of the low carb sweeteners like erythritol and xylitol have been found to be safe. Xylitol has even been found to be an antioxidant...but it does cause some gastronomic distress so use xylitol sparingly unless you want the laxative effect.

Why do we crave sweets?

Up until the last century the majority of foods were not processed whatsoever. And during the last six million years before that, humans hunted and gathered for food before they started farming.

As humans tastes developed they were attracted to sweeter foods, not only for the higher calories but also for protection. Bitter berries, fruits and vegetation are often poisonous. It was a survival mechanism that has evolved within all of us and has only been heightened with processed food.

Sugar tends to be addictive because of the manner in which we evolved so we crave it. When we eat processed sugar it signals and trains our brains to eat more.

Check out this study that found conclusive evidence concerning sugar dependence and it's addictive qualities. If you crave sugar, don't worry. So does everyone else. It's just that way we have been built.

What you can do to tame your cravings...

I honestly never thought that I could truthfully say that I hardly ever have cravings for dessert anymore. To be honest with you, most of the time I prefer berries in a bowl of almond milk above any of the Keto desserts.

When I do have strong cravings I have noticed that it is either:

I used to crave sweets during bouts of depression as well...

I live at a very high altitude and it snows somewhere between six and eight months out of the year. While I do try to get out in the sunlight as much as possible and play in the snow, sometimes it's just too cold and cloudy.

I think that this was causing some of the depression that I was experiencing. I know SAD (Seasonal Affective Disorder) but I think it did add to it. I am happy to say that Keto has changed my mood and mindset. If you are saying "bullshit", I hear ya.

I thought the same thing...how could Ketosis change my mood? Thom has explained it to me and I am sure he will go over it in his new book that will be available towards the end of November 2018, but I can tell you that it's true.

In my case, it was a longstanding issue with past trauma that caused PTSD. That word is thrown around a lot. But, I believe to some degree all of us have it. Some people deal with it by using drugs or alcohol. I leaned into alcohol with all of my might during one point in my life...

But more recently, I ate my feelings in the form of chocolate and peanut butter. I think it's a pretty common response to emotional upset as well as not getting the right nutrients in my diet. It was just another form of addiction. And, since I wasn't eating enough fat during the rest of the time my willpower was non-existent.

I fully believe that we can heal most common ailments with the foods that we choose to put into our bodies...

I am not saying that you should ignore your doctor, and this should not be construed as medical advice. But eating healthy foods that support your body the way that it was meant to work goes a long way into living a healthy life in both body and mind.

Has the Keto Diet increased your sense of well-being?

I would love to hear your thoughts on this or answer any questions about the Cinnamon mug cake!

I'm the Queen B here @ Castle in the Mountains. BSN, MBA.