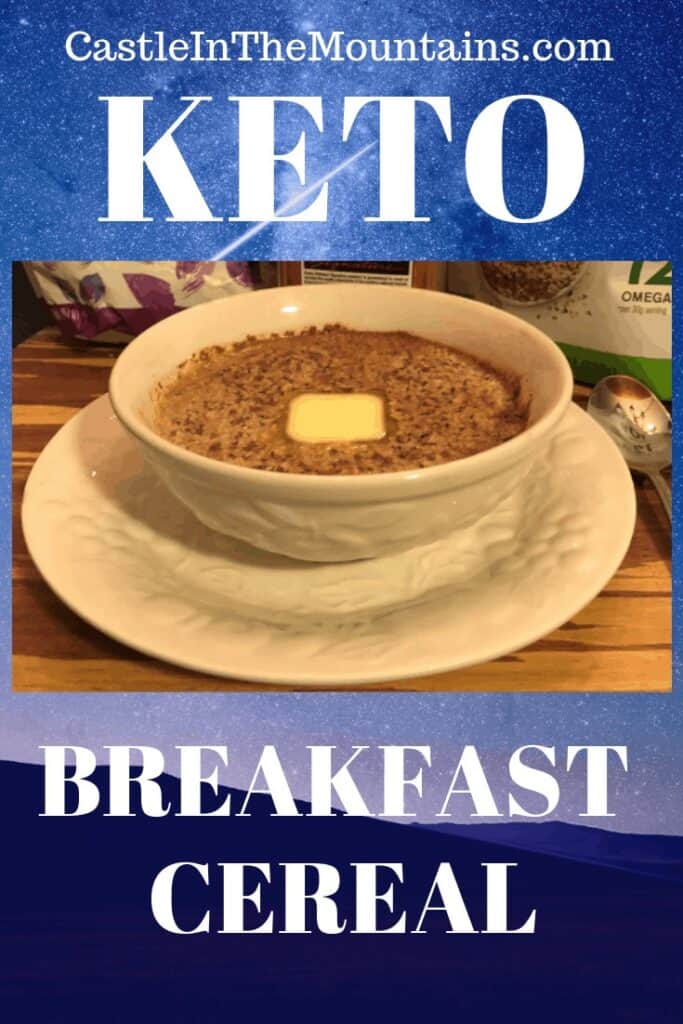 This Keto Breakfast Cereal will make your life easier if you need a quick breakfast option.

Plus, the high fiber will help you feel full, and stay on track as well as all of the amazing benefits fiber provides.

Most of us grew up slurping down a bowl of cold or hot cereal before we ran out the door to school and continued the tradition well into adulthood.

Grains have been a traditional part of our breakfast regimens for centuries because they are can be eaten quickly and keep us full until lunch. But they are definitely not part of the low carb Keto Lifestyle. One cup of plain, dry Cheerios packs on 64 net carbs. That's more than three days worth of carbs for me.

And let's be honest here - Who only eats one cup?

I also know that I don't have time to cook a time consuming breakfast because no matter what my health goals are, I still have to work. And, I also know that I am not willing to part with any more sleep to make it happen.

This is the fastest and most satisfying option that I have found when I am on the go and haven't prepared anything the night before.

Thom Collins
Keto breakfast cereal - as grandpa used to say - needs to stick to your ribs. It is also a real plus if it tastes good. This recipe brings back fond memories of Wheatena. You could go all day on this stuff. Try it with bulletproof coffee.
4.75 from 4 votes
Print Recipe Pin Recipe

If you would like it a little sweet, add a teaspoon of swerve I like cinnamon, so I add extra.  Some blueberries or pecans might also be nice. You may want to substitute coconut oil for the butter.  I am sure that would also be delicious.

Before I found the Keto Diet, I loaded myself and my family up with "ancient grains" and thought I was eating healthy....and I was, sort of.

I am ...ahem, a little bit past my thirties and have been trying to feed my family as healthy as I could since before I logged the big twenty-five year old milestone.  I have followed fads and kept up with "newly discovered" super-foods for years. But as time marched on, no amount of "healthy" eating, exercise  or starving on a low fat diet worked.

This drove me crazy because it seemed like whether I was eating Cocoa Puffs or oatmeal for breakfast everyday, there was not really a change in my weight.

It has taken us decades to realize that "no added sugars" doesn't mean "sugar free" or that it will help you lose weight, even with certain whole foods like fruits and some veggies.

A low carb Keto Diet is more accessible to everyone now...

Sure, doctors have been recommending the Keto Diet to those with special circumstances and diseases like epilepsy for almost a hundred years. But it was most definitely more difficult to follow than it is now.

With the advent of almond flour, coconut flour and coconut oil we have the ability to mimic the foods we love and have grown used to over our lifetimes. Bread and tortillas have always been integral parts of my diet. I LOVE TACOS and sandwiches. I don't eat the Keto versions of eithher everyday but it's nice to know I can have them when I want to.

Hemp hearts are fairly new to the grocery store and Chia seeds  were only used to grow sprouts on top of funny sculptures until recently. (Every kid on the block had a Chia pet at one time or another). I never imagined that I would be eating them in my breakfast bowl.

Variety is key when switching to a low carb Keto Diet because it makes it seem more life a sustainable lifestyle than a diet. No one "likes" dieting. But I certainly can connect with living a healthy lifestyle. It's a permanent way of living and eating.

As humans get older they generally dislike major changes in routine...

I am not saying that everyone dislikes change. But as we get older we develop routines that make us feel safe and grounded. I don't mean to sound trite when I say this.

I mean that if you have been eating cereal every morning of your life, you might not like the idea of giving it up no matter what your health goals are. In fact, you might even embrace the change for a short time only to fall back into the habit when you are stressed or short on time.

I have had PLENTY of bad habits in my lifetime. I still struggle with some of them even though I know how hard they were to break initially. The innocent bowl of cereal can be the same way. ( I'll just have a bowl of Honey Nut Crunch today and make my breakfast tomorrow) That's fine as long as you can get back into a routine.

You may think I am putting too much emphasis on a simple bowl of cereal. But humans are creatures of habit. We like stability no matter how much we protest and try to "roll with the flow". Even when we say we hate routine, we still crave it in some aspect.

Having something as familiar as a routine bowl of hot cereal in the morning balances out the rest of our lives in times of chaos whether that means a new job, a big project or even jerky co-workers.

People have emotional connections to their food whether they admit it or not.

No matter how disciplined you are, there is a food that reminds you of a simpler time. Mine is my Aunties French Toast loaded with butter and enough powdered sugar to make a paste. I could eat this everyday...and did for a while. Or, a big bowl of Cream of Wheat with butter and sugar.