Low Carb Waffles are nostalgic for me.

I am a waffle maker from way-back, and a waffle lover from even further back than that.

Some of my fondest memories from when I was a kid are of my Dad making waffles.

He used three waffle irons at a time and we had plenty of blown fuses because of it. There were nine kids in my family and we couldn't wait for our turn.

We used to make PB&J's on leftover waffles, if there were any.

The waffle Iron that you see in these picture I bought 13 years ago because Bran wanted waffles when she was pregnant with Ada. Suddenly waffles were the most important thing in the world.

So when I say that these are good low carb waffles, you can trust that I know what I'm talking about.

And what I am saying is that if you like waffles, you are going to love this waffle recipe.

So let's get started.

It's now a CastleintheMountains.com tradition to remind you to gather your ingredients.

I have Ada to remind me what I missed, but I still line it all up so I don't forget something.

I would hate to be trying to make a waffles and end up with a waffle shaped crepe because I forgot the baking powder.

The oat fiber your low carb waffles a great flavor and texture. But I haven't seen it sold at any of the stores near me (yet).

If you need oat fiber you can find it here.

If you don't have any on hand you can substitute ¼ cup of coconut flour for the ¼ cup oat fiber.

They are both soluble fibers which means that they will absorb a lot of the liquid from the other ingredients.

If you make this substitution there will be a taste difference.

The all coconut flour waffles are still good, but I think the oat fiber tones down the coconut flavor and is more like what a waffle should taste like.

Ha ha, remember I am a waffle expert.

Please don't try to use almond flour, you will end up with soup.

In the ideal world every kitchen would have a waffle iron, but I know that there are lots of you out there in Keto Land who may not have one.

When I was a kid things like waffle irons and mixers were expensive and you had to go shopping in the big city to get one.

I think that's why most people didn't have one.

Same thing with the mixer.

I know it seems like a lot more ingredients than a usual Castle-in-the-Mountains recipe because we try to keep things simple.

You put all of  the wet ingredients except for five of the egg whites in a blender and blend them. (cream cheese, 5 egg yolks, three whole eggs, almond milk and melted butter and the extracts)

Then you add the dry ingredients to the blender and you blend it. (oat fiber, coconut flour, allulose, baking powder)

The only real trick here is fluffing and folding in the egg whites.

You put those 5 egg whites that you separated in mixing bowl, and then using the electric mixer on high, you beat them until they are like a fluffy meringue. (Bran uses the Kitchen-aid because it's the easiest way to accomplish this task but I like to use the hand mixer because it's how my Dad taught me to do it.)

Then you just pour the stuff from the blender into the mixing bowl and fold them together.

Folding is not like stirring - you don't want to over-do it because you want all those air-bubbles in the fluffed egg whites.

The batter that you poured out of the blender is going to be heavier and sink to the bottom of the bowl.

It should be somewhat uniform.

Spread the batter in a line in the middle of the waffle iron it will spread out to fill out the rest of your waffles.

Then you close the waffle maker and wait.

On most waffle irons there is a light that turns on to indicate that the waffles are done.

With this recipe - on my waffle iron - that light was a little premature.  If you want your waffles crispy, you will have to wait an extra couple of minutes.

Whipped Cream: This is my favorite waffle topping - It's how I ate the ones in the picture.  Oh and they were good.

Melted Butter: This is Bran's favorite.  She said that with the maple extract and the allulose already in the recipe, it was slightly sweet and delightful.

Powdered Allulose: This is a classic. Just like the breakfast restaurant.

You can get powdered Allulose here, or you can make you own by putting granulated Allulose in a blender, and blending on high until it is ground fine.

I like this one, or you can make your own with the recipe on our French Toast Muffins Post.

A quick note about syrup:  We recommend Lankanto because it is made with erythritol and monk fruit which are not toxic.

Please be careful with sweeteners, there are some that have embarrassing side effects, and some that just toxic.

If you're not making them for the whole family, you may have leftovers.

That's not a problem.

Cool them on a rack or a plate with a paper towel on it, and then put them in a baggie or sealed container and store them in the fridge for a day or two. Or freeze them for a few weeks.

When you want to eat one, lightly toast it and you're good to go.

I usually just eat them with a little butter.  Ada likes them toasted with whipped cream cheese.

Or, you can use them for sandwich bread.  Bacon and egg sandwich on waffles is quick and really good.

That's it for now!

Go make yourself some Low Carb Waffles! As always, let me know if you have any comments or super duper toppings that I haven't thought of below... 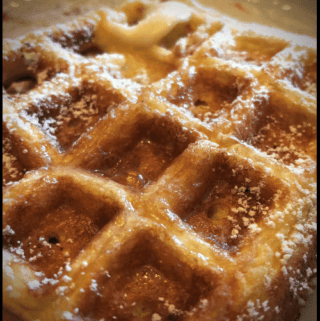 Thom
Oh man are you going to be happy today! These oat fiber waffles are a fantastic low carb way to start your day (or have dinner for breakfast). This recipe makes crispy and fluffy waffles just like the ones that you loved Pre-Keto. Even the Non-Keto Kids will love them! You can feel good about sharing these healthy waffles too!
4.34 from 3 votes
Print Recipe Pin Recipe

If you don't have any oat fiber you can use another ¼ cup of coconut flour.