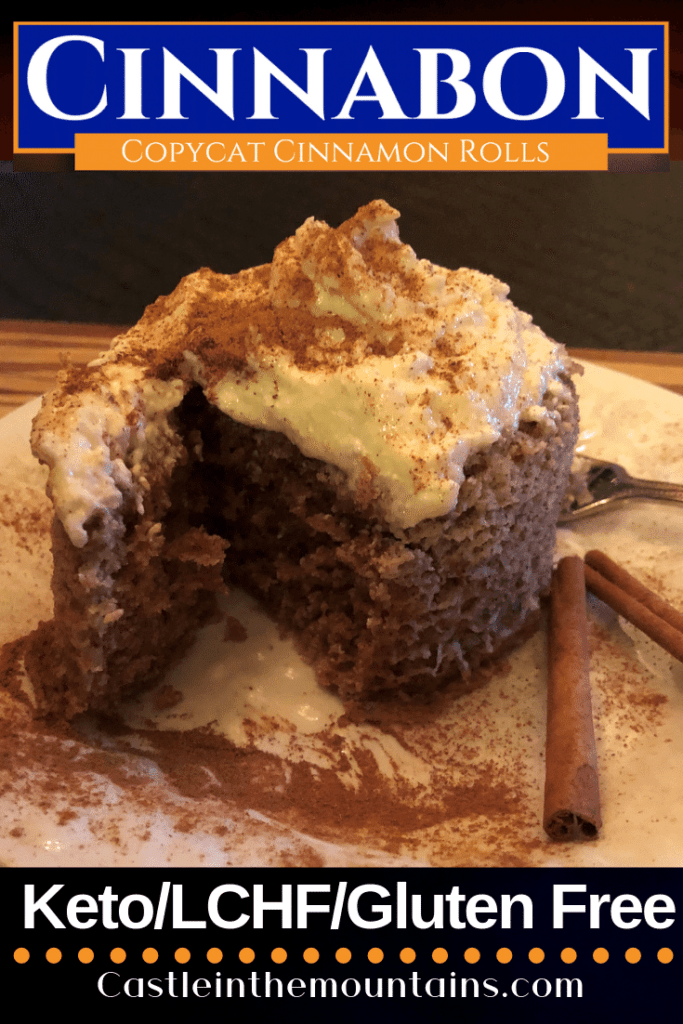 These Keto cinnamon rolls are as close to the real Cinnabon as you are going to get when looking for a Keto, Low-Carb and Gluten Free option....mmmm.

Do you love cinnamon rolls?

Did you think that the Keto diet means that you would never experience the sweet & buttery taste of Cinnabon again?

But it is damned delicious and we are thrilled to bring you our Keto cinnamon roll mug cake with butter & cream cheese frosting.

Take a couple of minutes to make yourself one these Cinnabon-esque cinnamon rolls, you deserve it.

This is really simple and sports only 5 ingredients.

I mean seriously how can you go wrong when 3 of the ingredients are  butter, cream cheese and cinnamon?

(We live in a cold climate, if you live in a warm climate and your "room temp" means that your butter and cream cheese mix easily when it sits out for a few minutes than you can skip all of this section.)

There are a couple ways you can do this.

Butter that is not already melted is pretty sketchy in the microwave because it is mainly just water and fat.

In the microwave the water around the edges of the butter will start to sizzle and splatter within what seems like about 2 seconds.

2. The toaster oven method is a little better for making the frosting.

Before you start doing anything else, turn your toaster oven to about 110ºF and in a bowl that you can mix the frosting in, just set it in the toaster oven.

In the time it takes you to make the cinnamon roll, the butter and cheese should be soft and easy to mix into creamy deliciousness.

Recipe Tip: How to Choose the Right Mug For your Cinnamon Rolls

You may have noticed in the pictures that my mug cakes always turn out with nice straight sides  and a flat top.  Like a cake shape.

That's because I have the perfect mug. For this recipe I used the mug in the middle.

When you are planning on frosting your mug cake it's nice to have a flat top.

Also, you will want to choose a 16oz mug or bowl for this recipe.

They have them on Amazon - they also work really well for soup.

Just the word cinnamon is delicious. It's fun to say and it's up there with chocolate as one of my favorite flavors.

But what you may not know is that it's really good for you.

For thousands of years cinnamon was primarily used for it's powerful medicinal properties.

And recently studies have shown that cinnamon is indeed "all-that."

Reducing inflammation is good because less inflammation feels better. And, keeps you safe from all of the nastiness that inflammation causes ( Cancer, arthritis, etc.).

Your joints and muscles will be less stiff and sore and if you add this to the anti inflammatory effects of Keto, you will be feeling pretty great.  (I can personally attest to this)

This in turn will of course be good for your blood pressure and circulation. Your heart will thank you.

Cinnamon has been linked to a reduced risk of heart disease.

Cinnamon is loaded with antioxidants

If you want to protect your body from oxidative damage caused by free radicals eating cinnamon is a great way to do it.

In a  study that compared the antioxidant affect of 26 spices including "superfoods" like garlic and oregano, Cinnamon came out on top by a long shot.

Cinnamon is such a powerful antioxidant that it can even be used a natural food preservative.

Cinnamaldehyde - the magical compound in cinnamon - may help fight all kinds of infections.

Eating cinnamon inhibits the growth of some pretty nasty food borne bacteria like listeria and salmonella too!

Cinnamon is a great complement to a Ketogenic Diet.

One of the really great effects of eating cinnamon is that it lowers blood sugar by increasing insulin sensitivity.

What that means for low carb and keto dieters is that the very few carbs that we do eat are run through the system with a minimum amount of insulin.

I even shared mine with Brandy...but secretly, I wanted to save half for later.

These go really well with strong coffee and good conversation so feel free to share yours too!

Cheers and Keto on! 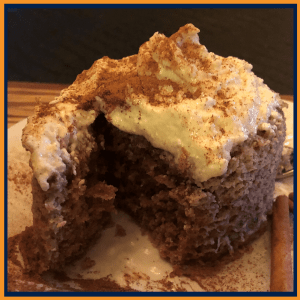 Thom
Super quick and easy. Great way to start the day or for dessert these mouthwatering cinnamon treats will delight you.
3.78 from 22 votes
Print Recipe Pin Recipe

The nutrition information for this recipe is provided as a courtesy - we try to be as accurate as we can, but if it doesn't look right please feel free to do your own calculations.

If you are looking for even more AWESOME dessert recipes you can find them here...