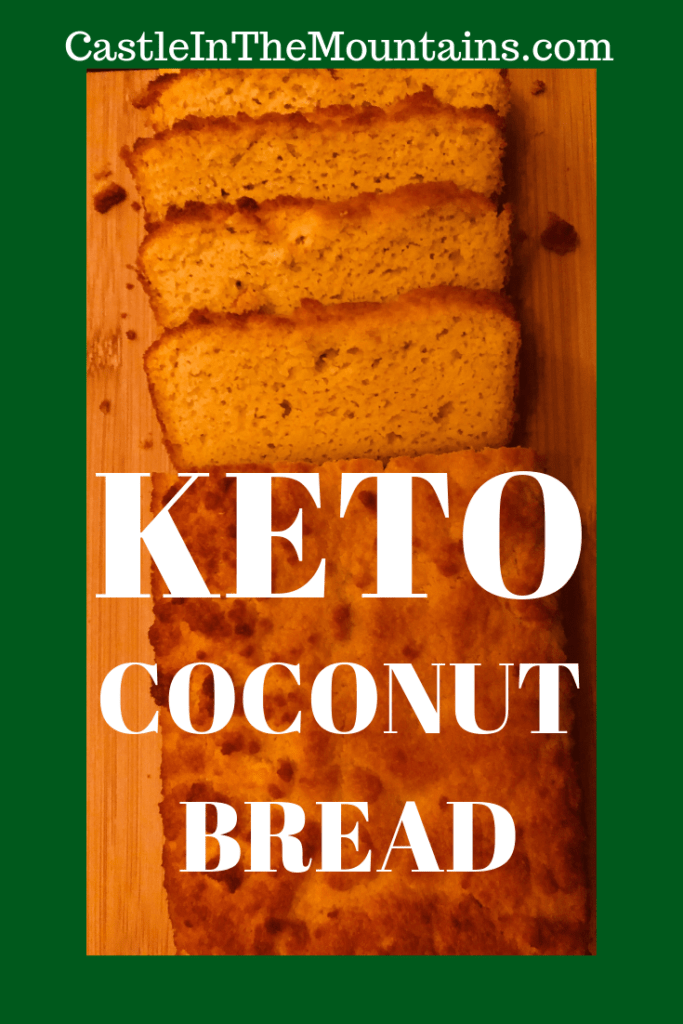 If you were on the fence about the Keto Diet because you think you will miss store bought bread you are in luck! Keto Coconut Bread is quick slice-able and delicious

This deliciousness takes about ten minutes of prep before you can put it in the oven and its the best Keto Coconut bread that I have tried so far.

A great recipe for anyone who has nut allergies, gluten sensitivities have some aversion to yeast or are just plain tired of almond flour. The key to success with Keto is to keep it interesting...

I only stray when I  get bored. I think a lot of people might be the same way.

It stays together and you can make a sandwich with it....yum. And, it makes excellent french toast. And, if you love breakfast type breads, check out this two minute Keto English Muffin Recipe.

Lot of eggs in this recipe but it doesn't have an overwhelmingly eggy taste because of the allulose. It's yellowish in color but I swear its every bit as good as the Almond Flour Bread and you don't have to wait for it to rise ( a real advantage when I don't have time to keep an eye on it).

Try it once and you'll come back to this recipe again and again.

Please note: this recipe has not been tested for a double batch. I suspect the weight may cause it to collapse and be hard/dense. This is often the case with non-yeast breads. But if you try it let me know what happens. 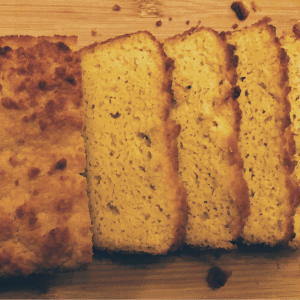 Bran
Delicious Keto Bread that's Nut Free, Gluten Free, Low Carb and easy to make. Just six ingredients and ten minutes to put together before you put it in the oven. By far the best Coconut Flour Bread I have tried.
4.65 from 17 votes
Print Recipe Pin Recipe

Try to wait until this bread is cool before you slice it. Slicing it while still warm lets valuable moisture escape through the steam. Store in the fridge tightly wrapped for up to 3-4 days for best flavor. The Nutritional info on this recipe is calculated by the serving as a courtesy. If you have any doubts please feel free to do your own calculations. NOTE: 2 net carbs per slice

The nutritional info on this site is provided as a courtesy and is as accurate as possible. If you ever have any doubts about the info on any site you should feel free to do your own calculations.

This Coconut Bread is worth your time...

I would never lie to my readers about that. I respect your time. I know it's valuable and something that everyone over the age of ten is short on. This recipe is worth so much more than the ten minutes you spend putting it together and the time you wait for it to bake.

It's damn delicious and opens up a bunch  of possibilities for breakfast, lunch and dinner. It won't kill your carb count either.

Toast it and slather it with butter, make it into french toast, make a sangwich or melt some cheese on it. No matter how you like your bread, this will work and I am convinced that most everyone will like it.

When Thom first got started on Keto I was reluctant to join him because I thought another "diet" meant giving up things like bread and dessert. Check out our Dessert page....

I love both bread and dessert so I just rolled my eyes thinking that I didn't want to join in because I didn't want to waste my time on another diet that would never work for me. I know myself. I just knew I would be eating cookies in the car and claiming that this diet was bunk because it didn't work for me. I thought I would need to starve...and I'm mean when I'm starving. I didn't wanna be mean.

I was wrong...sort of. While the Keto Lifestyle has decreased my chocolate, bread and tortilla cravings tremendously. There are times when I still want those things.

What I have found is that Keto is not about "giving up" everything that I like. It's about finding healthier substitutions for those things.

I haven't eaten much processed food for a long time and I became a pretty adept baker...even though the altitude that I live at makes making more of a challenge. Over the years I have perfected my own bread recipes, French pastries and phenomenal flaky cookies. I even gained the weight to prove it.

But as time marches on I have to accept that I can't continue like this. I have the advantage of being a few years younger than Thom, but I know that if I stay overweight I will eventually develop the same issues that he did....or maybe worse.

After watching him achieve the weight loss and freedom from his previously prescription medication filled day I realized that he was really onto something good.

I know I'll cheat if I don't have a plan for cravings and stress....

Once I decided to join him on this journey I realized something pretty quickly. I would cheat if I had a craving without a plan.

So my initial plan was to just have spoonful of that healthy, no added sugar, organic peanut butter. God I hated this stuff at first and I really missed the creamy, well mixed texture of Jiffy. But I got used to it and will never go back.

After a while, a very short while this didn't work either. And that's how this site got it's Keto Friendly bent.

I thought that if other people like me had easy access to recipes that could fulfill their cravings without having to spend hours in the kitchen than it would be helpful.

Thom has wanted to help people achieve Ketosis from the moment that he achieved it himself. He shouted Keto's praises from the rooftops and explained it to anyone who would listen. He truly has a calling for this sort of work.

I, one the other hand didn't want to go around talking about another fad.I may have even sprained my eye balls a few times rolling them when he would start his Keto lectures to anyone who would listen.

Starting in my 20's I chased fad after fad and spent tons of time and money trying to find a sustainable "diet" to stay healthy into my later years.

If a diet takes up too much time or too much energy, it won't work. It's temporary, expensive and they always fail. This left me more disappointed than if I had done nothing at all.

But this "Lifestyle" isn't like that. It's a sustainable change that anyone can achieve as long as they are willing to look for substitutes.

Yes, it takes longer to make your own food. But it's worth it to know what is going into your body and the bodies of those who trust you to take care of them....

There have been a lot of low carb products pop up on the market lately due to the popularity and success of the Keto Diet but use those as sparingly as possible.

They will help you achieve the weight loss but you might be paying a price for the convenience that you are not aware of. Preservatives and mass production processes might be stealing nutrients and benefits that you need and want.

But, I understand time crunches...I REALLY REALLY DO.

How did this bread work out for you?

I'm the Queen B here @ Castle in the Mountains. BSN, MBA. I am a keto enthusiast and food blogging coach.