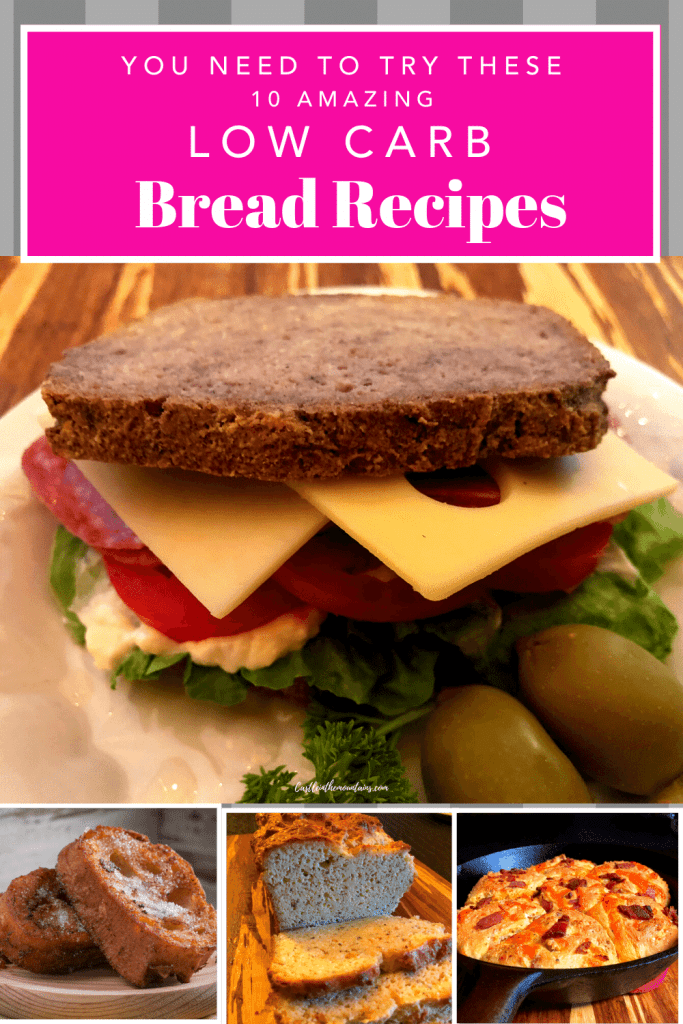 If you're like me when you first went Keto you missed bread.  Not just for sandwiches, but for toast, bread sticks and don't get me started on French Toast....

Don't despair, there are lots of Keto bread options.  I have been seeking good bread recipes from the start.

I'm not gluten free or dairy free,  but I understand that some of you are looking for gluten or dairy free Keto bread.  I think you will find something that works for you here.

While you're Keto you're not going to be eating Wonder Bread.

And, there are no Keto or low carb bread recipes that will make anything that tastes or feels like Wonder Bread.

For me that's fine, I never liked the cheap white squishy bread anyway. Unless it was for hot dog buns.

What I do miss is my Mom's whole wheat bread and Brandy's homemade sour dough that is made from a culture that we've had for ten years.

The recipes that I've listed here are the best of the best that I've found and tried myself.

I would love it if you would let me know which one you like best...

In the meantime there are some great recipes here and maybe you'll find a new favorite.

One of the first things that I did when I started the Keto diet is find a low carb bread alternative.  There are lots of them.  My favorite is my own that I made from some trial and error.  It's real bread without all the carbs.

I replaced the wheat flour, with almond flour and gluten.  It is absolutely not eggy, and it holds together well for sangwiches.  Even my tweeny daughter loves it.

This bread is dairy free, and egg free, but not gluten free.  It makes great toast, great sandwiches, and has only 3 carbs per slice.

If you're gluten free or Paleo this won't work for you, but fear not, there are lots of options that will work.

I really think this is the bready-est of all that low carb options I have tried, and as you will see I have tried a lot of them.

This Soft and Fluffy Sandwich Bread is Keto, gluten free, and Paleo.

It is a little more involved to make it.  But it's not eggy even though  it does have three egg-whites in addition to one whole egg. It's a yeast bread, and puffs up nicely if you follow the directions closely.  It makes great sandwiches and toast.

It's a fantastic option and you should check it out.

If you are looking for a no dairy, no egg option this a really flavorful low carb bread.

This is not a gluten free option because the ingredient that makes the dough stick together is vital wheat gluten.  Also because the recipe calls for ½ cup of dark rye flour, it does push the carbs up to 5.4 net carbs per slice.

I substituted black coffee for the water and it came out rich and flavorful.

On the bright side this bread is delicious. I would say it's worth the carbs - don't take that lightly as it is my highest endorsement of a  carb containing food.

Along with exquisite rye flavor this bread is also quite nutritious. It has 4 grams of fiber per slice.

For the gluten free and Paleo people this is a really great bread low carb bread option.  It has 4.5 grams of net carbs, but also 18.6 grams of fat, and 4.9 grams of dietary fiber per serving.

The carbs are a little high (8% calories from carbs.) but that is to be expected from bread and you shouldn't plan to sit down and eat half of the loaf.

Overall, this is a very good bread, it fluffs up nicely and in spite of the 5 eggs, it does not have a particularly eggy taste.  It makes a good sandwich, and toasts well.

I made it with the coconut creme option and added a small amount of erythritol and ¼ teaspoon salt to cut the coconut flavor down.

Make sure this bread cools completely before you slice it ( if you can wait that long).

This is another fantastic Keto option for the Paleo and gluten free people.

It has the texture of whole wheat bread, and a nice nutty flavor.

According to the sugarfreelondoner.com it has less than 1 gram net carbs, so it is very low carb.  The fluff is supported by egg whites and xanthan gum, so it is gluten free.

Don't over mix this one and use a smaller pan if you want the nice top rounded "bread" shape.

This one is very Keto friendly, Paleo and gluten free.  It has 2 net carbs per slice.

Now I am not going to lie to you, this bread is eggy and dense, and I absolutely love it.

Slice thin and toast it, slather on a generous pat of butter, have a cup of the bullet proof coffee with it, and you have a Keto breakfast that will keep you going the whole day, and probably into the next.  We have made cheese toast, and garlic bread, and little cocktail sandwiches.

This is not the beady-est of breads, but try it with an open mind, and I think you will be pleasantly surprised.  But if you really don't like eggy, this is not the low carb bread for you.

This is another really great option for Keto, Paleo and gluten free diets.

This is a basic bread recipe, it only has 5 ingredients which makes it a little easier to make.

The recipe uses eggs and cream of tartar to hold it together.  The cream of tartar not only helps the baking powder make for a lighter bread, it's an acid so it mitigates the eggy taste.

If you need a quick bread with less than 2 net carbs, this is a great choice.

The trick with this one is that you separate the eggs, and then beat the whites with the cream of tartar until they make a fluffy meringue, and then fold that into the rest of the ingredients.  Kind of like you're making waffles.

You can really use this bread just like you use regular bread that you buy at the store.  What I did is slice the whole loaf, and then use it for whatever.  anything from sandwiches to French toast.

Keto friendly, Paleo and gluten free and less than 1 net carb per serving.  And it really does take less than 2 minutes.

The coconut flour gives it a nice flavor but you can still taste the egg.

You can use this very much like regular carb-ful bread.  There are only five ingredients - you mix them up and you nuke them and after 90 seconds you have bread.

This is a very hearty breakfast bread.  It is gluten free and Paleo as well as being Keto friendly.

This bread seriously packs in the fiber. So many people who start the Keto Diet have trouble fitting enough in but this bread will definitely help.

But let's talk taste.  This bread is not for the faint of heart. All the nuts and seeds, and the lack of leavening make for a coarse dense mouth feel. When I made this I added a teaspoon of cinnamon because what goes better with a slightly sweet nut and seed bread than cinnamon?

This is a stick-to-your-ribs happy gut bread that is great by itself or with butter. When I think of breakfast I think of how well it goes with coffee, and this recipe I am going to recommend to our local coffee shop.  They really need some Keto options like this.

Another best.  This Best Low Carb Bread recipe.  It is very low carb with only 1.1 net carbs per slice.  In addition to being Keto friendly it is Paleo and gluten free.

If you follow the instructions and fluff the eggs and add the optional cream of tartar, you can have a very nice bread.  We made  fantastic grilled cheese sandwiches with Jarlsberg and Cheddar out of this loaf.

This is a straight forward bread that worked well the first time I tried it.

First: We have added a ton of low carb bread recipes since this post was first published. Here are just a few...

Most of the breads on this list have some sort of leavening, usually either yeast, baking powder or baking soda.

There are also some recipes that add cream of tartar, or whipped egg whites to help the bread puff when you bake it.

Sugar or some carb like wheat flour is required to make yeast work.  All of the yeast recipes call for some actual sugar.  That will not add to the final carb count because the yeast consumes the sugar and releases methane.  It is the methane bubbles that make the bread rise.

Baking soda is only one ingredient, sodium bicarbonate.  You can use this to make your bread rise by a chemical process where the baking soda comes into contact with an acid and the chemical reaction makes CO2 bubbles.  But you have to add the acid in the recipe to make this happen.  So whenever you see a recipe that calls for baking soda, you will also need to add some acid like salt, vinegar, or buttermilk.

There is a difference between good baking powder and not-so-good off-brand baking powder.  The kind and amount of acid used varies, and the performance of baking powders also varies.  I always stick with Clabber Girl brand because that is what my Mom always used and it always works.

This is a powdered form of tartaric acid.  It can be used as the acid in the chemical reaction with baking soda.

But it has some use as a flavoring to give a little tang.  Some of these bread recipes call for cream of tartar to counter the eggy taste.

Cream of tartar is also use to stiffen whipped eggs and meringue.

Lots of these recipes call for no calorie sweeteners.  Some of these sweeteners are toxic and dangerous to your health.

The only one that is healthy and that I can recommend with a clear conscience is erythritol or allulose.

This is highly disputed in the Keto Blogging world but I have done a bunch of research and believe that it is the best option  Click here to read more about erythritol.

That's it for the top ten bread recipes that I love. Try them and welcome toast back to your breakfast table today!