These Jalapeno bacon cheddar fat bombs are a great snack, or you can have two or three of them as a meal replacement.

They will keep you satisfied.

Plus they're kid approved...Ada loves them.

One caveat though, I know a lot of kids don't like spicy, hot food.

Sure it's the middle of the summer now, but pretty soon you will be thinking of what to have for football snacks.

I know that us Keto people don't drink much beer, but my fav beer substitute  - vodka soda with lime - and some of these spicy delights will get you ready for kickoff.

They will go nicely with a sharp red wine like a Chianti or Sangiovese if you are going to be fancy about your alcohol consumption.

It could be just me, but whenever I see cheese I think of what kind of wine I would have with it - I am kind of fancy like that.

Brenna says that if you add more jalapenos they would be like Jalapeno Poppers without all of the work of having to stuff the cheese into the peppers.

There are just 6 ingredients in these fantastic little snacks.

And in less than 30 minutes you can make a Ketolicious cheese & bacon savory fat bomb that will keep you satisfied.

I heard a person on a radio cooking show the other day who said that bacon grease should be a food group unto itself.

I am a high fat enthusiast and promoter of a ketogenic diet, so here on a fat bomb post seems like a great place to to talk about the pros and cons of cooking with bacon grease.

The Pro of cooking in Bacon Grease

The up-side of cooking with bacon grease is pretty obvious, it's delicious.

Another upside is that bacon fat is a highly stable saturated fat with a fairly high smoke point.

The Cons of cooking in Bacon Grease

Back in the bad-ol'-days bacon was made with just salt and smoke. And the pork that it was made from was organic

Now-days most of the bacon that you buy in the supermarket is made with nitrates which are not very good for you.

Over consumption of nitrates has been connected to all sorts of digestive maladies including things like stomach cancer.

If you are one of bacon-grease-is-a-food-group sort of people you don't have to worry there are a couple things you can do.

Uncured bacon is more expensive and a lot of places (like where I live) it isn't even available.

Or you could take a vitamin C pill.

Recipe Tip about the Bacon Fat

If you decide that you are going to use the bacon grease in the recipe, you can leave out the coconut oil. ( We don't do this but I bet it is tasty).

In the skillet you are going to use, fry the bacon first, remove it and set it aside.

Then fry the jalapeno peppers and chili powder right in the same pan, and then add that to the cream cheese mixture just like you would have with the coconut oil.

Even Easier Ways to do the Bacon

Bacon Crumbles. These are just precooked and chopped up bacon.

If you don't want to deal with the time and mess to fry and chop slices of Bacon Crumbles are great.

We actually ran out of the chopped bacon, but being ever-so-resourceful (not lazy at all) we looked around for something to roll the last couple fat bombs in and we settled on smashed up Pork Rinds.

This is not exactly the same texture or flavor as the bacon but I think it is pretty good.

Why Should You Eat Fat Bombs

The question came up the other day:  Do I have to eat a bunch of fat to make Keto work for me?

The short answer to that is no, you don't necessarily have the hit you fat macro to have a keto lifestyle and get the benefits.

If you ate very low carbs and hit you protein macro, and then didn't eat all the fat, you would still get some of the benefits of the keto diet because that would keep your insulin low enough that you would stay in ketosis.

The problem with only protein and really low carb plan is two fold.

First, if you over eat protein instead of fat the excess protein will be turned into sugar. This might knock you out of ketosis and slow your weight loss. It will probably make you hungry or even "hangry" in the process.

Second - and I know this probably sounds weird - but when you eat fat as your main source of calories, you will eat less, and you will feel less hungry.

If you have any questions about this hit me up on our Facebook Page or leave a comment below! 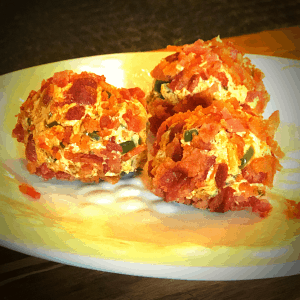 Nutrition information is provided as a courtesy.  We try to be precise but feel free to do your own calculations if anything ever looks off.

Our Keto Lifestyle Page has lots of great information.