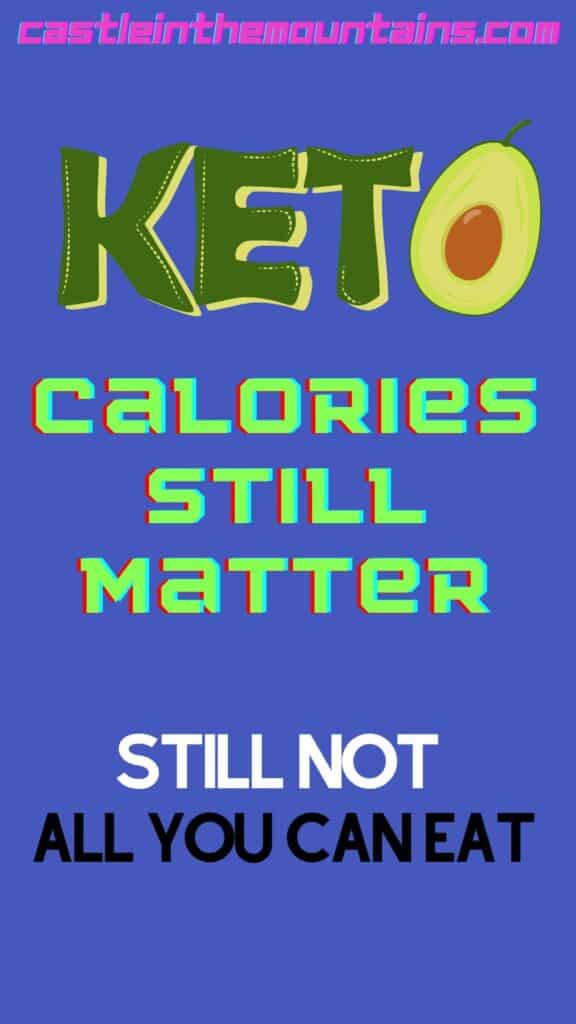 Nobody wants to hear this, but Keto calories still matter.

You can eat too much on Keto and gain weight, and unless you have a calorie deficit you won't lose weight - you may lose some water weight, but you'll still need to burn fat.

The other day I was talking to a person who said they were frustrated because they hadn't lost any weight in a while.

It’s understandable to be frustrated by a weight loss stall, but then they said they were going to "up their protein and fat intake" and see if that helped.

Even on a Ketogenic Diet - Calories Matter.

There is a common misconception, that if you’re following Keto calories don’t matter.

Keto is not an all-you-can-eat diet.

I understand the misconception. I’ve been there and I felt it.

When I started the Keto way of eating, not only did I get to eat bacon and butter as part of a "well balanced, low carb Keto diet," but then I hit ketosis and the weight fell off like an avalanche. I didn't count calories either.

It seemed like magic, but it wasn't magic...it was water, not body weight.

During the first weeks of ketosis, people (like me) generally experience a lot of weight loss.

Even if a person eats more calories than they burn, when they get into ketosis for the first time they lose weight - usually quite a lot of weight and really quickly.

When I got into ketosis the first time, I lost over 10 pounds during the first week - I was thrilled! You can do it too. I explain the process here.

But then - for me - weight loss slowed down and even stopped for days at a time.

I was worried, and I started obsessing over my macros - I might have been unbearable.

The first big weight loss, when I got to ketosis, was not 10 pounds of fat loss, it was mostly water.

But still, I lost 10 pounds. I looked better and felt better. So I took the win and reassessed what was actually going on.

Quick Weight Loss is all Water

Now, I understand that it would be impossible to lose 10 pounds of body fat in a week - barring something like liposuction or amputation.

A pound of fat is 3500 calories of stored energy.

To burn off 10 pounds of that fat storage in a week, a person would have to be in ketosis, eat nothing, and burn 5,000 calories per day.

If an average person started the week in ketosis and fasted - ate no calories - for 7 days, they would lose 4 pounds of fat stores.

Bear with me there is a happy healthy ending to this.

The Math of Fat Burning

I don't want to get too nerdy on you here, but there are a few numbers that are important.

A pound of stored fat has about 3500 calories.

Fat is stored energy, and, other than liposuction, the only way to get that fat out of your body is to burn it.

To lose a pound of actual fat a person must burn 3500 more calories than they consume.

If you eat carbs, your body will store 600 grams (2400 calories) of carbs in your muscles and liver as glycogen.

Exactly how many calories your body burns in a day is called the BMR or base metabolic rate. In other terms, its a resting energy expenditure.

The average BMR is usually less than 2000 calories/day.

A woman's resting energy expenditure is usually between 1200 and 1900 calories per day- it differs from person to person.

A man's BMRs are usually between 1800 and 3000, because men are generally bigger with more muscles.

What Happens with Keto Calories - An Example

That means that they burn 2000 calories per day.

And to make it simple we'll say they just stop eating right after dinner on Monday - let's say 7:00 pm.

By 9:00 pm the blood sugar insulin spike from the carbs is gone.

By midnight the insulin response from the protein is also done and they are at their fasting insulin level.

At this point the glycogen/carbs stored in the muscles and liver is topped off at 600 grams.

Our person will now burn stored glycogen for the next 29 hours.

So, by 5:00 a.m. on Wednesday morning, our person will have burned all of the stored carbs and be in ketosis - burning nothing but fat.

If they continue to fast, they will be burning nothing but fat at the rate of 2000ish calories per day.

This means if they continue to eat nothing until the following Monday at 7:00pm, they will have burned about 14,000 calories more than they consumed, but only 11,159 of those calories will have been from body fat.

At 3500 calories per pounds that equates to 3.3 pounds of actual fat.

I know 3.3 pound doesn't sound like enough weight loss for a week of not eating.

Our person will have 3.3 pounds less fat on their body, but the scale will likely say they're over 10 pounds lighter.

This is because in ketosis you excrete sodium and with it goes a bunch of water.

Excreting sodium will also lower blood pressure so there's that.

What if this person eats high fat foods on Keto instead of eating nothing?

If instead of fasting, this person started to eat a ketogenic diet at exactly 2000 Keto calories per day (this is an example- 2000 calories is too many for most people), they would lose the water weight but not the fat.

And the weight loss would stop at about 7-8 pounds of water.

Happy Ending 2: The Other Benefits

A person who eats a Keto diet and doesn't lose weight will still get the other benefits of a ketogenic diet.

Those other benefits are important and include a lean body mass, blood sugar control, lower body fat percentage and a higher energy expenditure rate (that means you can eat more and still lose weight).

If a person is eating a nutritious balanced ketogenic diet, and they decide that they want to lose a couple pounds of actual fat they can do that without feeling hungry.

All they would need to do is eat less calories and less often.

If our person in the example stayed Keto and cut their calories to 1500/day they would burn off a pound of actual body fat per week.

And if they decreased calories to 1000 they would burn off 2 pounds in a week.

The point is that if you're already a fat burner, you're body will have no problem switching from dietary fat to fat stores.

You could even eat nothing for a few days if you wanted to try intermittent fasting to accelerate calorie burning.

No matter what a Keto person does, as long as they stay keto they shouldn't get hungry.

I fasted for 3 days just to see if it was true, and it was great.

I stopped eating at 10:00 am Tuesday and I didn't eat anything until Friday.

Lost about 1-½ pounds of actual body fat, and I felt great doing it.

And the best thing was: I didn't get hungry at all.

The Takeaway about Keto Calories

Keto is great, but it is not magic, it's science.

The great advantage of a Keto/low-carb diet is you don’t have the insulin in your blood to stop you from burning fat.

When you eat these proportions for long enough you will get in ketosis and burn fat as your primary energy source, but that doesn't mean you will lose fat weight.

If you’re in ketosis, and you want to burn fat all you need to do is maintain the proportions (75% healthy fats, 20% protein, 5% carbs) and reduce your overall calories.

If you have the Keto proportions right and you aren't losing weight, the first thing to do is eat fewer calories.

Don't get crazy about calorie counting but calorie tracking for a short time might help.