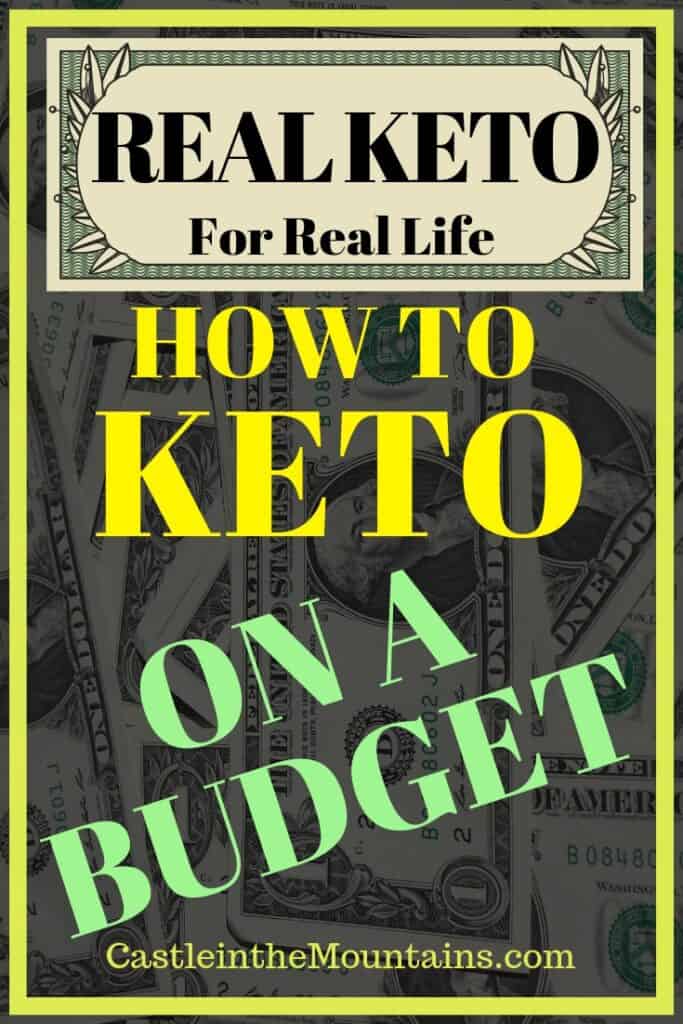 Keto on a Budget? I mean really, who doesn't want to save a little dough on Keto? No one, that's who. You don't have to be rich to follow a low carb lifestyle....

Ketosis, the weight loss and all the other benefits of the Ketogenic Diet don't need to cost you an arm and a leg.  The idea is that you keep your arms and legs, they just get thinner and healthier.

It is true that almond flour costs more bleached wheat flour.  But if you pay attention, the Keto diet can be good for your health and still good for your budget.

You can do Keto on a budget, feel better still have enough money to do other things.  Here's how:

Buy Meat with Bones and Skin

Since you want the fat, you are going to want the skin on your chicken.  Don't pay extra for boneless skinless chicken breasts.  If you put some good spices on them and cook them until it get crispy, the chicken skin is delicious.  We call it chicken bacon.  So not only is it less expensive with the skin on, it more Keto friendly and delicious.

Organic Meat On a Budget:

We recommend organic meat. Toxins gather in the fat of animals. Animals raised eating cheap, toxic laced grains that were raised with pesticides are not as good for you as organic.  But this is a post about saving money, so remember organic food also goes on sale. Make your own decisions about what type of meat you eat...we are inclusive and want everyone to benefit from this diet but please be informed.   If all you do is get the carbs out of your diet, and replace them with healthy fat and fiber you will be healthier even if you don't eat organic meat.

Butcher Box meat is still a little more expensive per pound than the nonorganic stuff at the store, but it is delivered to your door frozen in vacuum sealed in perfect meal sized portions.

Don't forget that you can also use the bones to make bone broth which is a fantastic, and full of good nutrition.

Pre-made bone broth is expensive.  You can make you own by just boiling bones and adding some salt instead of throwing them away.

Buy Meat on Sale and Freeze it

I'm sure that you have seen them - those economy packs of meat - 50 chicken wings, and they cost $1.99/pound.  You think, "who in the hell would eat that much chicken wings." The answer is you if you like saving money.

You don't have to eat them all for dinner in one night though.  Get yourself some zip-lock bags, and divide that gargantuan pack into meal size amounts, and throw those in the freezer, and then you have a quick easy and inexpensive ketogenic meal plan when you need it.

You can also do this with all of those huge packages of everything from ground beef and bacon to brats, corned beef and pork chops.

And don’t forget the cheaper cuts of meat. They have more fat on them and they are perfect for the crockpot.  Pork loin has almost no fat on it, and it cost $7.00/lb. It is delicious if you wrap it in bacon before you cook it.  But pork shoulder or spare ribs  are cheaper and easier to cook` because they have the fat already on them.

Weird suggestion right? But potted meat is decent and tasty and can make some awesome, filling meals. My friend Janice made Keto Tamales with canned chicken. And I love this hearty Keto Corned Beef Hash with the canned stuff.

A head of lettuce cost about $1.69 and Roma tomatoes are usually about a $1.50/1b, tofu is about $2.00/per pound.  Salads are great for variety, and when you go Keto they’re even better  because you use lots of dressing and cheese.  Also don't forget about soups and stir-fry.  Use your imagination and salad can be Keto, inexpensive and delicious.

This works out really well to keep it interesting and stay on the budget with the Keto diet.

Not only is produce cheaper when it is in season it is also better.  Some veggies, like lettuce and tomatoes, don't really have a season.  Avocados also grow year round.

But summer squash, zucchini, cucumbers are best and cheapest from June through August. Spaghetti squash is in season in August and September. Cabbage, Brussel sprouts, and cauliflower are in season in the late fall in early spring.

Don’t Forget About the Farmers Market

Your Keto recipes need to include high quality veggies.  Our local grocery store is okay for produce, but in the summer we have a local farmers market, and roadside stands.

We buy chili peppers by the bushel and freeze them for the winter.  We also enjoy the veggies, especially the lettuce and collard greens.

It is a misconception that farmers markets are expensive places that yuppies hang out and lament wilted squash blossoms.

At a  real farmers market you are buying in season produce directly from the farm.  It should be less expensive than the grocery store with the middlemen and the mark-ups.

The crock pot is one of the greatest inventions for people who like to follow the healthy Keto lifestyle.

If you don't have lots of time you put ingredients in in the morning and forget about it until dinner.  There are hundreds of great recipes for budget friendly and Keto friendly food.

Remember those big packages of meat that you made into meal size packs? Throw them in a crock pot with some veggies and spices and you have dinner.

There are a few things that you should not buy...

Keto shakes are expensive, and their value is not worth their price. Whole veggies oxidize quickly and lose their nutritional value anyway...make your own shakes.

Use Coconut Oil instead.  MCT oil is made from part of the coconut oil - the mid-chain triglycerides to be exact.  It offers some benefit, but for the budget minded person is probably not worth it.  Coconut oil is much less expensive, more available and about a third of the cost.

Try to avoid buying pre-made salads, soups, stews and stir-fry. You will need to cut stuff up for your meal prep if you want to save money.

This applies to most products like pre-cut stew meat, and fajitas.

One exception: a lot of frozen vegetables are pre-cut and the same price or less than fresh veggies.

Don't Buy Anything that You're Not Going to Eat.

In the Keto diet you will need to lots of vegetables, especially leafy green vegetables.

The Keto lifestyle is about making your life better, not torturing yourself with food you don't like.  So, you definitely don't want wreck your budget with food that you're not going to enjoy eating.

You Can Do It

In the end you don’t have to break the bank to get the things on your shopping list.  Keto is a much healthier way to live, and it can be just as budget friendly as any unhealthy alternative.

If you have any Keto budget tricks, please leave a comment.

That's all for now,