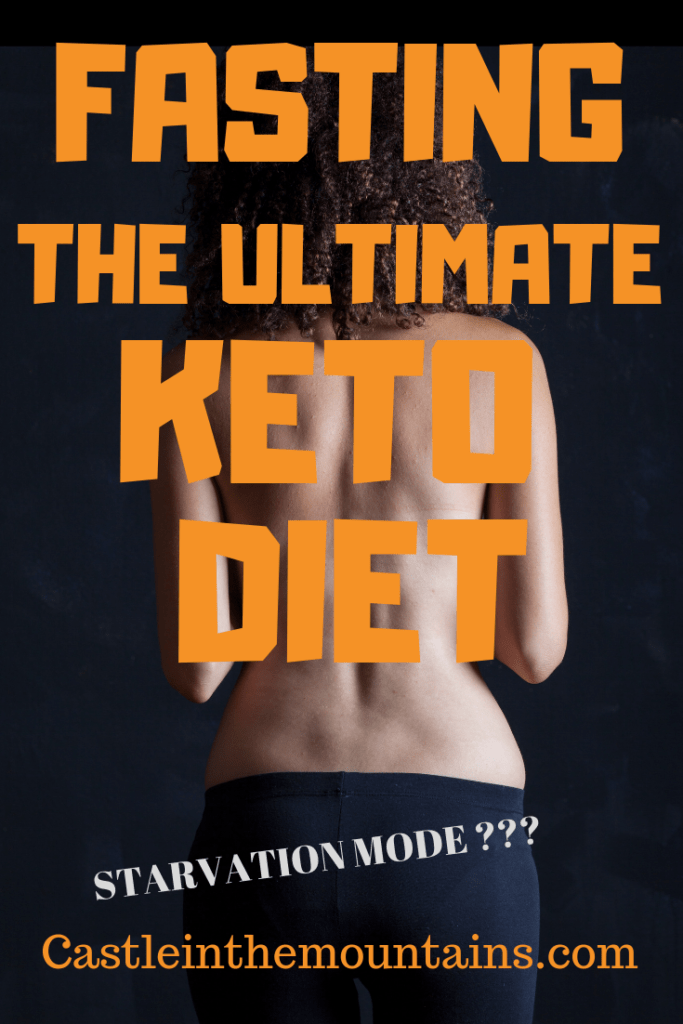 That sounds like an impossible claim, but I really did it, and I felt great while doing it.

The benefits of Intermittent Fasting and even longer fasting periods is just too good to overlook.

We here at Castle in the Mountains want you to succeed with your weight loss goals. We don't like the word diet because diets fail.

We want you to lose weight and be thin and healthy forever and we want this for ourselves too.

We are sure that you can succeed at losing weight, but unlike most of the diet industry we want you to keep it off.

And, we don't want you to just keep it off until the next fad diet comes out.

I understand that there are lots of you who want simple directions on how to make this work for you. I get that.

You probably want to know if it is safe. I must tell you to talk to you own doctor about whether it will be safe for you personally, but many studies say that if you have some body fat to burn this is a safe and healthy way to do it.

If you just want to know how to do it, here is the short form:

Okay, so that is the really short form, but it really that simple.

If you don't think you can or want to do a fast- check out this post on how to lose ten pounds in 7 days without starving. It's not as simple as a fast, but it is effective.

Stop eating for 16 to 72 hours. No calories, and no sweeteners..

You can have black coffee and tea, the caffeine is not a problem.

Club soda is great if you want something bubbly.

You have to drink enough water (1 ounce of water for every 2 pounds of body weight per day is a good goal).

You may want to have some salt.

Same as Intermittent Fasting, but for more extended periods of time.

Stop eating but for 72 hours or more.

There are some added benefits to extended fasting: detoxifying, increased immune system, and you produce more stem cells and mitochondria.

Check out Dr. Ken Berg's video - "What Happens When You Fast"

My Experience with Fasting

I had to know if the whole fasting thing was going to work for me.  I wanted to find out for myself what it felt like and how hard it is.  Is it really the promised land for health nuts everywhere.

I do this almost every day now. It is really easy for me because it has become a habit.

There is no health or metabolic reason to eat three meals a day.  In fact one meal a day would  healthiest.

I stop with the coffee at noon, and then have herbal tea, club soda, or just good ol’ fashioned water.

When I eat lunch, I try to eat something that is very low carb, like salad, eggs, breakfast tacos, etc.

This works well to keep me in ketosis, plus I do enjoy eating.

I generally don’t do a lot of snacking because of the insulin spikes.

But when I do snack, I will usually do it close to dinner, and what I like is peanuts, pistachios or pork rinds.

Our dinners are usually Brandy’s demonstration of just how delicious the Keto lifestyle can be.

And I eat until I am satisfied.

I was really curious about extended fasting. I had read all about it, but I really had to try it for myself.

I read about how it would not be too hard, and that there would be few if any side effects, but I was still surprised at just how easy it was to not eat for a few days.

I only felt hungry once when Brenna made biscuits and gravy.

It was the smell that did it. A walk with the dogs to clear that from my nose and I was alright again.

All of the things that I usually do, I did while fasting, and I felt fine - in fact better than fine.

The dogs got their regular 2 miles of walking each day, yard work got done, and, I did yoga every day.

The one thing that I didn't do was any high intensity muscle building sort of exercise because you can't build muscle without protein, and since I would not be eating, I thought it best to not try to damage anything.

Here's the kicker, the biggest surprise was how much easier it was to sit still at the computer and concentrate and focus, and do things like write this post.

Once I got a day into it, I found it was not that hard. There was no hunger.

I didn’t spend time thinking about eating - It was like I added a couple more hours to the day.

It was great, I am going to be doing this again. Maybe seven days next time.

Before I started had an omelet.

My idea was to fill up on something that is most ketogenic, and give myself a little protein cushion.

My oxygen concentration and pulse rate stayed right in the normal range.

My blood pressure during the first two days was a little higher than normal, probably due to the lack of high intensity exercise.

Overall this was a great experience and I challenge all of you to try it. And when you do comment on this post.

If you are starting your Keto Lifestyle with a fast:

The fastest way from sugar burner to Keto adapted is an extended fast.

I don’t know from personal experience how an extended fast will affect a person who starts fasting from a high carb diet.

It may be harder to get started on a fast for someone who starts as a sugar burner, but once you get past the initial drop in insulin, it should level out and become just a matter of not eating.

And now for the Nerdy Science Disclaimer

The Keto diet works very well to lose weight, and there are tons of other benefits too. Even though it works like magic, it isn’t magic. It's biology.

And in really general terms, is not that hard. It's all about insulin.

As you probably know, insulin is released from the pancreas in response to blood sugar which is primarily the result of eating carbohydrates.

You probably also know that insulin tells your cells to open up to sugar.

Insulin is a fat storage hormone.

A lot of people apparently don't understand that insulin does a bunch of jobs other than just pushing glucose into your cells.

One very important function of insulin is that stops you from accessing your fat stores.

Insulin stops fat cells from releasing the triglycerides to the liver where they can be converted in ketones.

When insulin levels in your blood are too high you cannot burn fat.

If a person who has lots of excess body fat stops eating they will get into Ketosis and they will start burning that fat. I know because I am one of those people.

If that same fat person stops eating and are are given insulin shots that raise their insulin they will starve.

If they continue getting insulin shots they will starve to death while staying heavy.

This is something that I have heard for years that from diet industries like Jenny Craig etc. that has never quite made sense....

Here is what they said: If you eat too much you will get fat - okay good so far.

But if you stop eating you don’t get thin because your body goes into starvation mode.

Your metabolism slows down and you start burning your muscles for energy. Did you hear this at some point too?

Then they say this is because we’re evolved that way.

Our bodies store fat for when don’t have enough food, but then when we don’t eat we burn muscle and slow our metabolism so as not to burn the fat that we saved for a time when we’re not eating.

Is it just me, or does that make about as much sense as putting sand in your water bottle?

If you would like a great explanation of how our bodies actually work click here and watch Dr. Jason Fung’s video about the Two Compartment Problem.

And if you're a reader, Dr. Fung's book The Obesity Code explains how fasting works and all of the benefits.

Intermittent Fasting & the Keto Diet will not Cause Starvation Mode.

If you eat a Ketogenic diet, or if you don’t eat at all you will not create enough insulin to stop you from accessing your fat stores and burning them for energy.

The Biggest Loser was a TV show (which is now being made again) where "super health guru" Jillian Michaels starves and tortures fat people into losing weight in the most unhealthy and unsustainable way.

Let me explain, the Biggest Loser Diet which is extremely low fat and calorie restricted to about 1200 calories per day.

This same kind of diet was used in the 1944 Minnesota starvation study  where they were trying to learn about the effects of starvation so they could help starving refugees of WWII.

The reason this study has not been replicated since then is that it is considered unethical to starve people (even volunteers) for the sake of science.

Apparently, The Biggest Loser gets a pass because they are doing it for for entertainment.

This is not what our bodies are evolved to do! Low fat, frequent meals is unnatural and unhealthy.

I think this might be the only way (other than insulin shots, see above) that an overweight person could die of starvation.

Here is great video to show the contrast between starving on carbs and fasting.

If you have any questions or comments please leave them in the comments section below.